Constipation may be defined as infrequent bowel movements, hard (dry) movements or bowel movements that are difficult to pass. It is normal to have bowel movements from three times a day to once every three days. Sever (pathological) constipation is a bowel movement every seven days or less frequently. Hard bowel movements are a problem only while they cause irritation while being passed. Ten percent of individuals who say they are constipated actually have a normal bowel habit. Part of the reason for this may be the misperception that anything less than one bowel movement per day is abnormal. 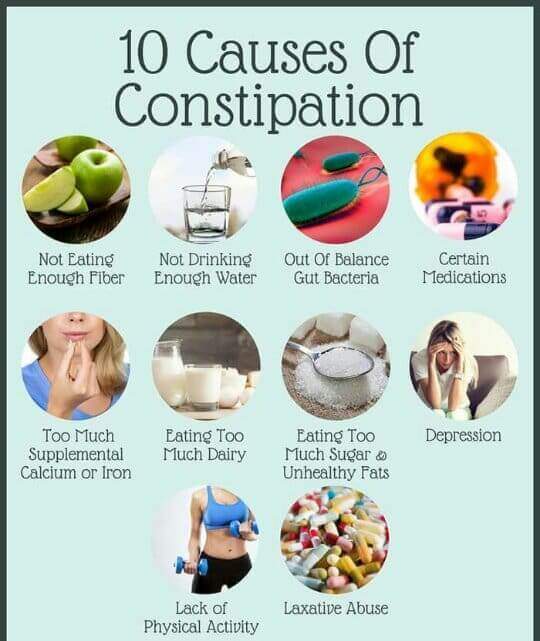 Potential causes of constipation include:

1. Loss of the normal urge to have a bowel movement because of longstanding and frequent, intentional suppression of the urge.
2. Longstanding use of stimulant laxatives
3. Inadequate bulk (fiber) in the diet
4. Inadequate fluid in the stool
5. Disco-ordination of the rectal muscles that are used during defecation
6. Diseases of the nerves and muscles of the colon and rectum
7. Systemic diseases that affect the bowel, for example, low thyroid function
8. Obstruction of the colon due to cancer or diverticular disease.

The therapies for constipation include:

1. Attempting to revive the normal urges to have a bowel movement (e.g., using stimulatory foods, exercise, and rectal stimulation, usually in the morning)
2. Adding fiber to the diet (e.g., fruits, vegetables, grains)
3. Using medications that increase water in the stool
4. Using lubricants (e.g., mineral oil) to reduce irritation from the passage of hard stools.
5. Identify and correct colon obstruction.

There are many popular laxatives that are readily available in pharmacies; however, many of them are “stimulant” laxatives, that is, they stimulate the muscle of the colon to promote bowel movements (e.g., cascara, phenothalein, etc.). The problem with stimulant laxatives is that they can be habit-forming and ultimately cause the loss of the normal urge to have a bowel movement, Stimulant laxatives should be avoided. Contrary to popular believe, drinking large amounts of water does not result in increased water in the stool.